The Stellar™ Strata™ combines the benefits of an exceptional analog preamplifier, a full-featured state-of-the-art DAC, a stereo 150 watt per channel power amplifier, and a high-resolution streaming module in one gorgeous package. Just add speakers. Have your own source? No problem. Strata offers 3 analog and 5 digital inputs to connect whatever source you need. Strata’s fully balanced analog preamplifier circuitry, state-of-the-art DAC, no compromise high-definition streamer, and Analog Cell™ based power amplifier create an extraordinarily rich, full-bodied musical experience few products can match. The Stellar Strata is the perfect foundation for those unwilling to compromise sound quality. Rich. Lush. Powerful. A music lover’s answer to spiraling cost-no-object equipment without sacrifice. 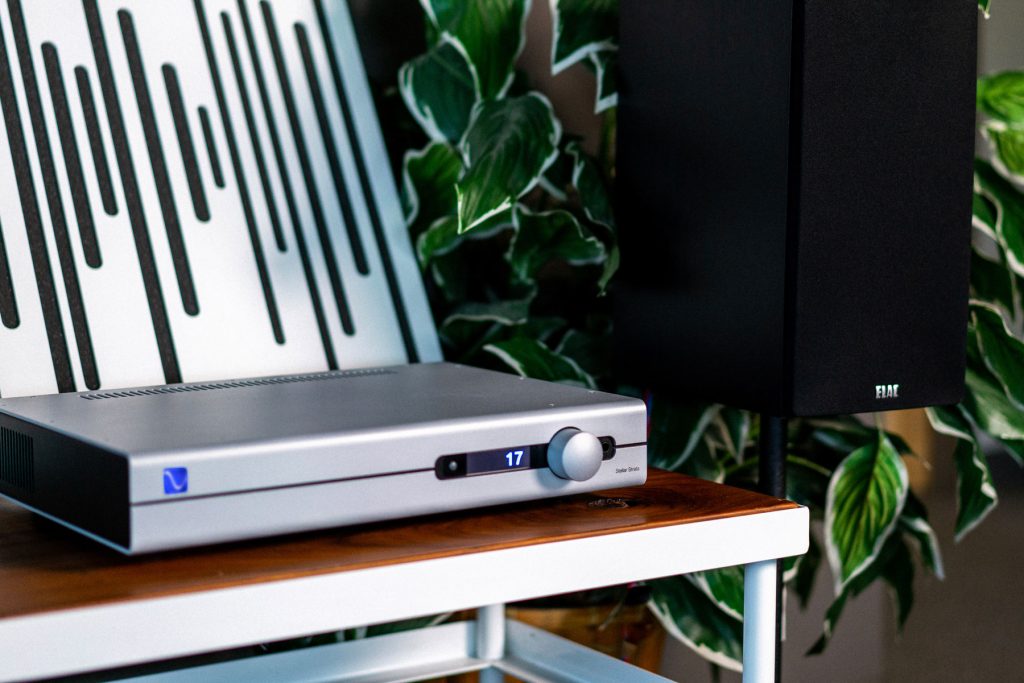 Just add speakers. From day one of Strata’s development cycle, the engineers at PS Audio set out to craft a no-compromise all-in-one music reproduction system that was simple to use and breathtaking to hear. Connect to your home’s WiFi network, download the PS Connect App, and choose from millions of tracks available on Tidal, Qobuz, or Spotify.

Strata can stream high-resolution audio, or connect to any digital or analog source you wish. With its many digital and analog inputs, Strata is ready to rock!

All the features and functions you’d ever want in an analog preamplifier and modern DAC are right here in Strata. A zero-loss, fully balanced, pure, analog signal path combined with DAC features rarely found at any price level: pure DSD, asynchronous USB, Digital Lens technology, I²S to connect to our best transport, balanced throughout. Replace your preamplifier, your DAC, your power amplifier, and be stunned at the level of improvement when the full and rich tapestry of music surprises and delights your senses. 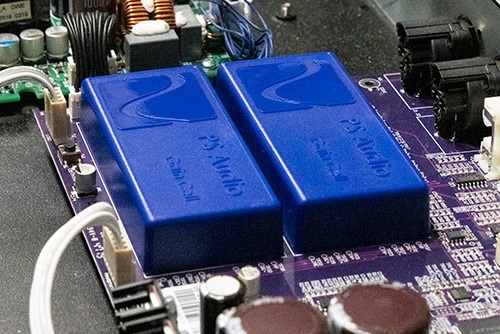 At the heart of Strata is its analog preamplifier section: the GainCell™. Invented in the early 2000s by PS Audio founder, Paul McGowan, this unique approach to variable gain amplification eliminates a classic audio performance problem caused by the volume control.
All preamplifiers must provide a means for the level to be turned up or down and all have something in common. They are elements inserted in the signal path that degrade the musical signal.

The GainCell solves the problem

Instead of inserting an additional level control in the signal path, the PS Audio Gain Cell relies on a different technology known as a variable gain amplifier.

The idea behind the GainCell is simple. Instead of adding additional circuitry to the signal path to vary loudness, the preamplifier’s actual amplifier stage varies its gain in response to the user’s front panel volume control. This method requires zero additional circuitry in the signal path, offers more than 80dB of attenuation, and if designed properly performs to the equal of high-end preamplifiers.

Strata has 100% analog input switching so users can select what they listen to without ever leaving the analog domain. Strata’s variable gain amplifier solves the problem of signal degradation from additional circuitry to control volume. Together, these pure analog technologies honor the signals passed through them, whether they’re from Strata’s internal DAC, streaming module, or an external phono stage, nothing in the music is sacrificed or lost. Music’s preserved in all its rich glory.

For those into headphones (and who isn’t?), Strata offers an exceptional sounding and powerful analog headphone amplifier on the front panel. Strata will automatically mute its main outputs when a headphone is plugged in and the listener can enjoy all that’s great with a high-performance set of headphones. This is music reproduced at its finest.

The Digital To Analog Converter and high-resolution streaming module inside Strata will transform your expectations of what’s possible.
The DAC inside Strata produces a seamless 3D soundstage from even normal CDs. Labored over by its chief architect, Bob Stadtherr, and hand-tuned and voiced by Darren Myers, the improvement in sound quality over other DACs can be a revelation. The Strata DAC accepts inputs from any digital source including I²S, USB, TOSLINK, or Strata’s internal high-definition streaming module and outputs directly through Strata’s powerful amplifier directly to your loudspeakers.

Used with PS Audio’s Connect mobile app, available for IOS or Android, or music server software like JRiver, Bit Perfect, Amarra or Pure Music, Strata becomes your entry into the world of high-end digital audio music, both PCM and DSD. Performance is superb at anywhere near the price and there are good reasons why.

The DAC chip itself is based around the acclaimed 32-bit ESS Sabre Hyperstream architecture, the output of which is passively filtered to reduce transient distortion.

I²S is the native format of all CD transports and many servers. I²S features a separate clock and data signal from the source. Typically, this clock and data signal are multiplexed together to be transmitted over a single cable in a format known as S/PDIF (Sony Philips Digital Interface), or AES/EBU (Audio Engineering Society/European Broadcast Union). Once received in multiplexed form, the DAC input must untangle the clock and data and once again separate them. I²S solves the problems associated with unraveling data of S/PDIF and AES/EBU formats.

Strata’s I²S inputs are compatible with our DirectStream Transport and allows full access to the master quality levels found on the locked SACD layer of SACD discs. Only PS Audio DACs, such as DirectStream, and now Strata, are authorized to play the pure DSD layer in all of its glory.

Strata offers the choice of three digital filters for users to select from. Each digital filter has a different sonic character and the choice of filters offers an excellent means of improving system synergy. No filter choice is wrong or right. Instead, each filter can be selected and auditioned by the user to more perfectly match their chosen collection of the amplifier, source, and loudspeaker, as well as personal tastes and biases.

Users can relax and use the supplied remote control to audition each of the three filter choices for best audio quality matching the system it is played on. Should users upgrade their amplifier, speaker or sources at some point, Strata is there to help maximize performance.

Unique to Strata is PS Audio’s newest module, PS Connect. Used in conjunction with the PS Audio Connect app, available on IOS and Android devices, Strata owners can launch into the world of high-resolution streaming. Media with sample rates of up to 96kHz can be streamed directly into Strata’s internal Digital Lens to reduce jitter and improve streaming performance as never before.

PS Connect can stream from popular services such as Tidal, Qobuz, Spotify, Napster, and iHeart Radio, as well as any DLNA source on the home’s local network.

Connection to the home network is easy through Strata’s built-in WiFi or Ethernet connection.

The power amplifier plays a critical role in more than just delivering enough power for your speakers. It is an essential component in preserving music’s nuanced details such as overtones from plucked instruments, subtle cues defining placement, depth, soundstage width, and transient decays.

The power amplifier inside Strata loses nothing. Engineer’s Bob Stadtherr and Darren Myers were obsessed with providing a power output stage that could handle any speaker connected to it while lavishing great attention on even the tiniest nuances in the music.

The 150 watt per channel power amplifier inside Strata captures the rich full-bodied essence of recorded music and presents it to your loudspeakers with authority and grace—with never a hint of glare or unnaturalness.

The Analog Cell makes all the difference
The connection between preamplifier and power amplifier is critical, for it is at this junction where most essential musical details are easily lost. Nothing in the design of a power amplifier is more important than its input stage when preserving music’s finest nuances. In Strata, a proven topology called the Analog Cell has been employed to preserve the rich details found in music.

The Analog Cell closely mirrors the warm sonic characteristics of a vacuum tube while maintaining the power and control of the best solid-state amps. The listening experience with Strata starts feet tapping and smiles breaking out.

Strata’s perfected internal connections between preamplifier, Analog Cell, and power amplification stage eliminate the problems normally associated with interconnects and maximizes synergy between internal systems. The sonic benefits of synergy must be heard. Strata’s preservation of the smallest details in reverb, room acoustics, musical overtones; its commanding presence without intrusion; it’s delicate handling of subtle shadings; its authority as it grabs hold of the loudspeaker and breezes through even the most complex musical passages is a joy to be experienced.

Strata has it all. Connectivity, control, power enough for any loudspeaker.